The SAS compressor controls combine both performance control and anti-surge control for the following types of centrifugal compressors:

The controls can also include load balance for multiple parallel compressors. In addition, the compressors can be sequenced based on the demand for compression.

The SAS compressor controls include the following features for each compressor:

These features are discussed in more detail in the following sections of this document.

A typical performance curve for a variable speed compressor is shown in Figure 1a, and the performance curve for a fixed-speed compressor is shown in Figure 1b.
The curves show the relationship between the head generated by the compressor and the resulting flow. The relationship is inverse, meaning that as the head increases, the flow decreases, and as the head decreases, the flow increases.

At high head, the curve terminates at the surge point. If the flow is reduced below this point, the compressor suffers rapid flow reversal, which is called surge. Surge can cause extensive compressor damage if it is not quickly counteracted. 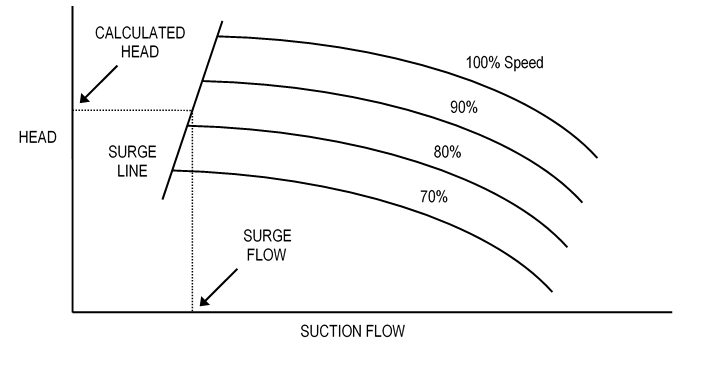 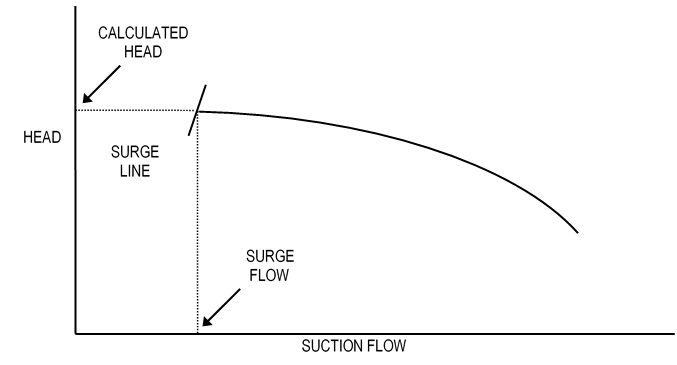 The variables head and suction flow are typically used as axes for performance curves. However, the surge curve plotted on these axes is not independent of gas conditions (i.e., suction pressure, suction temperature, molecular weight). Therefore, the following parameters are used instead:

Surge curves plotted on these axes are relatively unaffected by changes in gas conditions. The equations for these parameters are as follows:

A characterizer block is used to perform a table lookup of Rc vs. hc. The suction surge flow hsrg can then be calculated by rearranging equation 2:

The term hsrg is converted to suction flow as follows:

It must be noted that Fsrg is the suction flow. If the flow orifice is in the discharge, then hsrg would need to be compensated for the difference in flowing density between the suction and discharge.

Therefore, a minimum control margin is added to the surge point. The margin ensures that the flow will be slightly above the surge point even during minor fluctuations, as shown in Figure 3.

The equation for minimum control margin is as follows:

The variable control margin concept can be illustrated using a performance curve similar to Figure 1b. Figure 4 shows the compressor operating well above the minimum control margin. The anti-surge flow controller setpoint (control point) is set within an engineer-entered control band below the current operating point.

Figure 6 shows the compressor operating at the minimum margin. In this case, there is no variable margin because the operation is too close to the surge point. 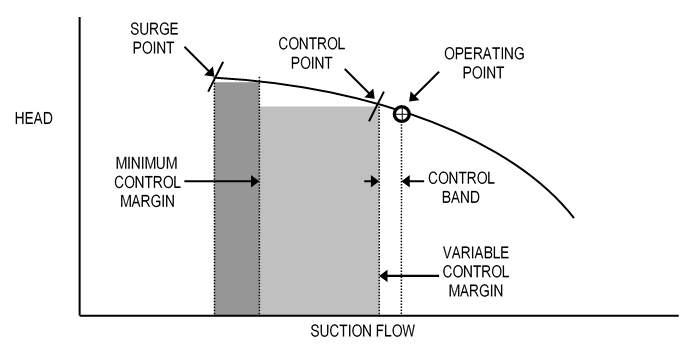 The equations for variable control margin are as follows:

The anti-surge flow controller MEAS is filtered (Ffilt) to prevent short-term fluctuations from affecting the variable control margin calculation. The filtering algorithm is implemented as follows:

The equations for adaptive tuning are as follows:

Kadapt = adaptive tuning factor (limited to a maximum of 1.0)

The adaptive tuning technique previously discussed can result in extremely rapid opening and closing of the anti-surge control valve. This is especially likely as the flow approaches surge because the flow input will become noisier.

To prevent this potential control instability, the SAS compressor controls include asymmetrical control action. This feature allows the anti-surge control valve to open quickly to avoid surge, but close gradually to prevent upsetting other control functions.

The control margin can be set back to the original minimum control margin either automatically or manually. The automatic reset is based on elapsed time since the last event. The reset time is set by the engineer. The manual reset is via a button on the anti-surge control graphic display.

The purpose of performance control is to match the throughput of the compressor with the demand for compression. Typical manipulated variables for adjusting throughput are:

The demand for compression can be measured by any of the following inputs:

Performance control often includes overrides to prevent the violation of other variables, such as:

Air blowers are often controlled by a discharge pressure controller that manipulates a suction valve or IGV. A high motor amps override is typically included.

If the blower has a suction valve instead of an IGV, the controls are exactly the same. If the blower has neither, the S/R, the low selector, and the IGV must be deleted from the scheme in Figure 8. The PC output then goes directly to the high selector. 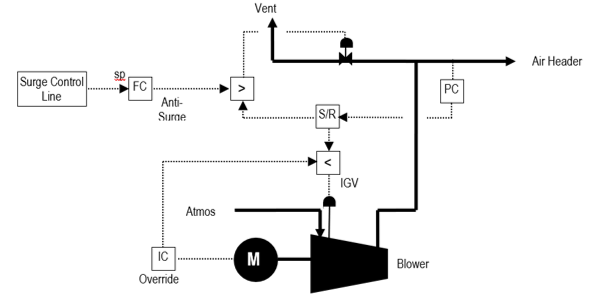 The SAS compressor controls include the ability to ramp the performance controller output upon compressor startup and/or shutdown. The following scenarios are typical and can be adjusted to customer specifications:

The operator starts the motor and the compressor comes up to speed in the unloaded position. After detecting the motor start/run via a contact input, the SAS compressor control logic can delay for a preset time period and then ramp the performance control output from the shutdown position to a preset minimum position. The control engineer can specify the delay time, the ramp rate, and the minimum position.

The valve or speed is ramped up until the performance controller, or one of its override controllers, takes over. At any time, the operator can manually suspend the ramp, and manually resume it.

The operator can manually unload the compressor, or the control logic can initiate the unload action. The controls automatically ramp the performance valve or compressor speed to the minimum position. The control engineer can specify the ramp rate.

When the compressor is shut down, the SAS compressor controls automatically ramp the performance control valve to the shutdown position. The control engineer can specify the ramp rate.

In applications involving multiple parallel compressors, a master performance controller is employed to measure the total demand for compression and adjust all compressor performance valves to meet the demand. A typical control scheme is shown in Figure 9, in which a turbine-driven blower and a motor-driven blower are operating in parallel.

In this case, the process demand is indicated by the discharge header pressure. Therefore, performance control consists of a single header pressure controller (PC) adjusting the turbine governor and the suction valve through two bias controllers (HC). The bias allows one blower to be adjusted up or down versus the other. 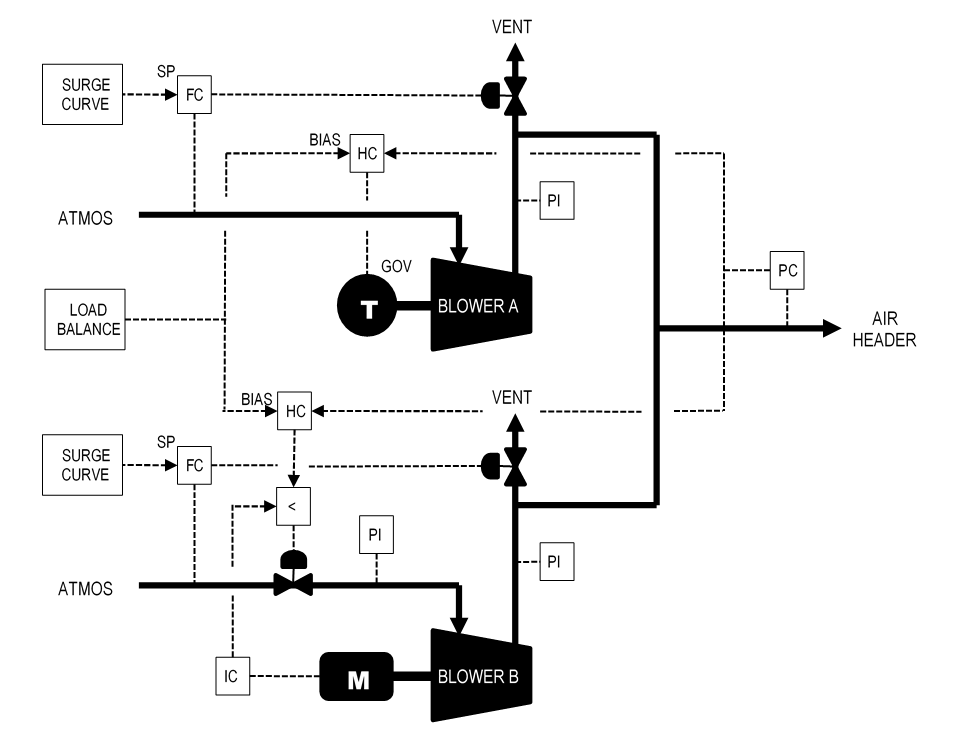 Compressor load is measured by calculating the relative distance of the current operating point from the surge control point. This value is expressed as “percent surge” and is calculated as follows:

The reason that percent surge is used for load balance is to prevent one compressor from recycling before the other. Recycle greatly reduces a compressor’s efficiency, and should be used only to prevent surge.

Equation 11 works well for compressors that are operating above the surge control point. However, when both compressors are controlling at the control point, both loads are zero, even though their loads may be completely different. Therefore, a way is needed to determine the relative loads under this condition. This is done by modifying equation 11 to include the discharge pressure difference, as follows:

The calculated load is filtered to prevent short-term fluctuations from affecting the control action. The filtering algorithm is implemented as follows:

The control equation for each compressor is as follows:

The Load Balance Controller limits each bias change to a maximum before applying the change to the bias controller. If the load error (Loadavg – Load) is within the engineer-entered deadband, then the error is considered to be zero and no bias change is made.

A compressor will be excluded from load balance when any one of the following conditions occurs:

A compressor may also be excluded when its speed or suction valve position is at maximum. This will happen only when the Load Balance Controller determines that it must increase the bias. If it determines that the bias must be decreased, then the compressor is not excluded.

Similar rules apply to compressors whose speed or suction valve position is at minimum. The compressor is excluded if the controller needs to decrease the bias. It is not excluded when the bias must be increased.

Assume that two compressors are operating as shown in Table 2. Compressor A is operating further away from its surge point than B. Therefore, compressor A load must be reduced by decreasing its bias and B must be loaded up some to offset the decrease in A.

Assume that two compressors are operating as shown in Table 3. Both compressors are operating at their control points, but compressor A discharge pressure is lower than B. The calculated percent surge indicates that A is less loaded than B since A’s discharge pressure is lower than B’s. Therefore, blower A load must be increased by increasing its bias and B must be decreased some to offset the increase in A.

The application keeps track of compressor start frequency and will bypass a high priority compressor if it is at the maximum number of starts. In addition, the application waits for a compressor to come fully into service before evaluating whether it needs another compressor.

The SAS compressor control logic checks each input and takes appropriate action in the event of a bad value. The following inputs are checked:

The SAS compressor controls are implemented via standard Foxboro I/A blocks. Each compressor has its own compound containing a similar set of blocks. Within each compound, the anti-surge control blocks appear first, followed by the performance control blocks. The load balance blocks are in a separate compound.

A single CP40 can host up to five compressor control packages operating at 100 ms execution frequency. An FCP270 can host even more packages, but multiple compressors are typically distributed among several control processors. Therefore, the number of compressors in a single CP is seldom more than two.

A plot of pressure ratio versus flow is included for each blower. It can be called up from the process display by clicking the mouse on a button labeled XY PLOT. For dual parallel compressors, both blower plots can be configured to appear side-by-side, as shown in Figure 10. 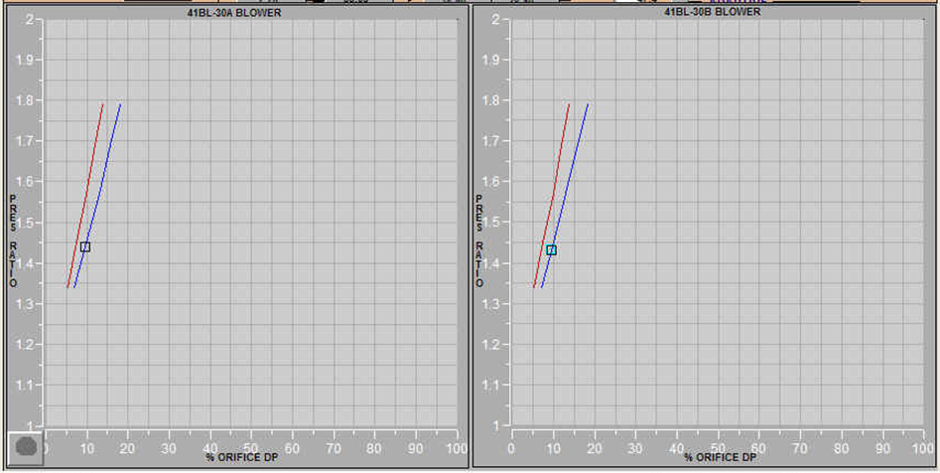