Refineries and petrochemical facilities often include boilers that fire natural gas, refinery fuel gas, liquid fuels, and/or various waste gases to produce steam. The steam enters a header which is connected to the various process units that require steam for heating or as a reactant. The header also receives steam that is generated in process units as well as in parallel boilers.

Steam demand and supply can change suddenly, depending upon operating conditions and upsets anywhere in the steam system. Therefore, the boiler must have effective process controls that set fuel firing to match the changing demand for steam. In addition, the firing must be controlled to provide efficient combustion.

These applications are discussed in detail in the remainder of this document.

The simplest control scheme would set the fuel flow to meet the demand for steam and set the air flow in ratio to the fuel. However, this scheme has a problem when the boiler is operating at the optimum air-to-fuel ratio, which is where the combustion air rate is just sufficient to provide complete combustion. The slightest negative deviation in the air rate can cause a significant increase in carbon monoxide and/or unburned hydrocarbons. Larger deviations can even result in an explosive mixture.

The solution to this problem is a cross-limiting control scheme (see Figure 1) in which the air rate leads the fuel on a demand increase, and lags the fuel on a demand decrease. Therefore, air is never deficient during load changes. Furthermore, the air demand signal is limited to a minimum air rate to prevent combustion problems at low steam demand.

The key to the cross-limiting control scheme is the “Fuel Override”. It calculates the maximum fuel rate allowed at the current combustion air rate and required air-to-fuel ratio:

The Plant Master is a PID controller whose output becomes the fuel demand signal to the combustion controls. The Plant Master utilizes the steam header pressure to indicate the imbalance between steam supply and demand. As steam demand increases, the pressure falls thus indicating that supply must be increased. Conversely, a rising pressure indicates that supply must be reduced to match the current demand.

In multiple parallel boiler arrangements, the Plant Master must output to each boiler’s combustion controls. In this case, each boiler has its own Boiler Master, which is an auto-manual station that accepts the Plant Master’s output, applies a ratio and bias, and sends the result out as the demand signal to the combustion controls. The ratio is used to account for boiler capacity differences. The bias is used to shift load between boilers. A boiler can be base loaded by putting its Boiler Master in manual. Figure 2 shows the Plant Master control scheme.

The optimum air-to-fuel ratio can vary greatly, depending primarily upon load, but also upon a number of other potential disturbance variables. The load variation can be programmed into the control system, automatically setting the ratio based upon a load curve. The load curve is established during a test run prior to the commissioning of the boiler controls.

The other disturbance variables are often unmeasurable, so a flue gas oxygen analyzer is usually employed to provide feedback trim control of the air-to-fuel ratio (see Figure 3). The amount of trim can be limited to a reasonable range around the programmed air-to-fuel ratio. The limited trim range helps to prevent bogus analyzer results from driving the ratio too far away from where it ought to be, especially in the downward direction.

The optimum setpoint for the flue gas oxygen controller can also vary with load. Therefore, the setpoint can be programmed versus load as well as the air-to-fuel ratio. The operator can bias the programmed setpoint.

The steam drum level indicates the flow imbalance between the BFW supply and steam production. Therefore, to maintain BFW inventory, the boiler controls include a steam drum level controller that adjusts the BFW flow.

The level indication can be affected by changes in the steam drum pressure as well as changes in BFW inventory. The pressure changes can cause shrink and swell, which can cause the level controller to adjust the BFW flow in the wrong direction. To mitigate this problem, three-element control is used to pre-adjust the BFW flow for changes in steam production rate (see Figure 4). The level controller then does not need to concern itself with major changes in load and can be detuned somewhat for trim control.

Note in Figure 4 that the incremental feedforward approach is also used here. As stated previously, this approach permits feedforward control to be limited to a reasonable range.

The following enhancements are often added to the boiler controls discussed above:

Control reliability can be increased substantially by utilizing redundant fuel flow transmitters and selecting the higher of the two signals. In the scenario discussed above, the erroneous low signal would be ignored and the air flow would not be adversely affected.

As shown in Figure 1, the air flow is controlled by adjusting the FD Fan damper. If the air flow indication were to erroneously increase, the air flow controller would close the damper. This situation could result in a dangerously low oxygen environment in the furnace.

Control reliability can be increased substantially by utilizing redundant air flow transmitters and selecting the lower of the two signals. In the scenario discussed above, the erroneous high signal would be ignored and the air flow would not be adversely affected.

Conversely, if the air signal erroneously decreases, it would be selected in this case. However, it would lead to an increase in actual air flow, which is a much safer situation than an erroneous decrease in air flow.

The following signals are vital to the safe operation of the boiler:

Increasing the reliability of the flue gas oxygen indication allows the output limits on the O2 trim controller to be widened. This permits the trim controller to handle fuel BTU excursions better. An erroneous furnace pressure signal in either direction can trip the boiler. Steam header pressure excursions will affect the entire facility, so a reliable signal is essential.

Control reliability can be increased substantially by installing three redundant transmitters for these critical inputs. A middle-of-three selector can then be utilized to pass the middle transmitter input to the control scheme. The middle is used because it protects against a transmitter failing in either direction.

Fuel BTU analysis can be used to compensate the fuel input for heating value excursions. This feature improves Plant Master response to these excursions and also helps the excess air controls maintain the proper air-to-fuel ratio. In this case, the air-to-fuel ratio is calculated in terms of SCF air per BTU fuel, rather than SCF air per SCF fuel gas.

For BTU compensation, the combustion control scheme must be modified as shown in Figure 6.

If the boiler can fire multiple fuels, then the combustion control scheme must be modified to include those fuels. Figure 7 illustrates the control scheme for three fuels that can be manipulated in cascade and one waste gas stream that is not manipulated. Only one fuel can be in cascade at a time. 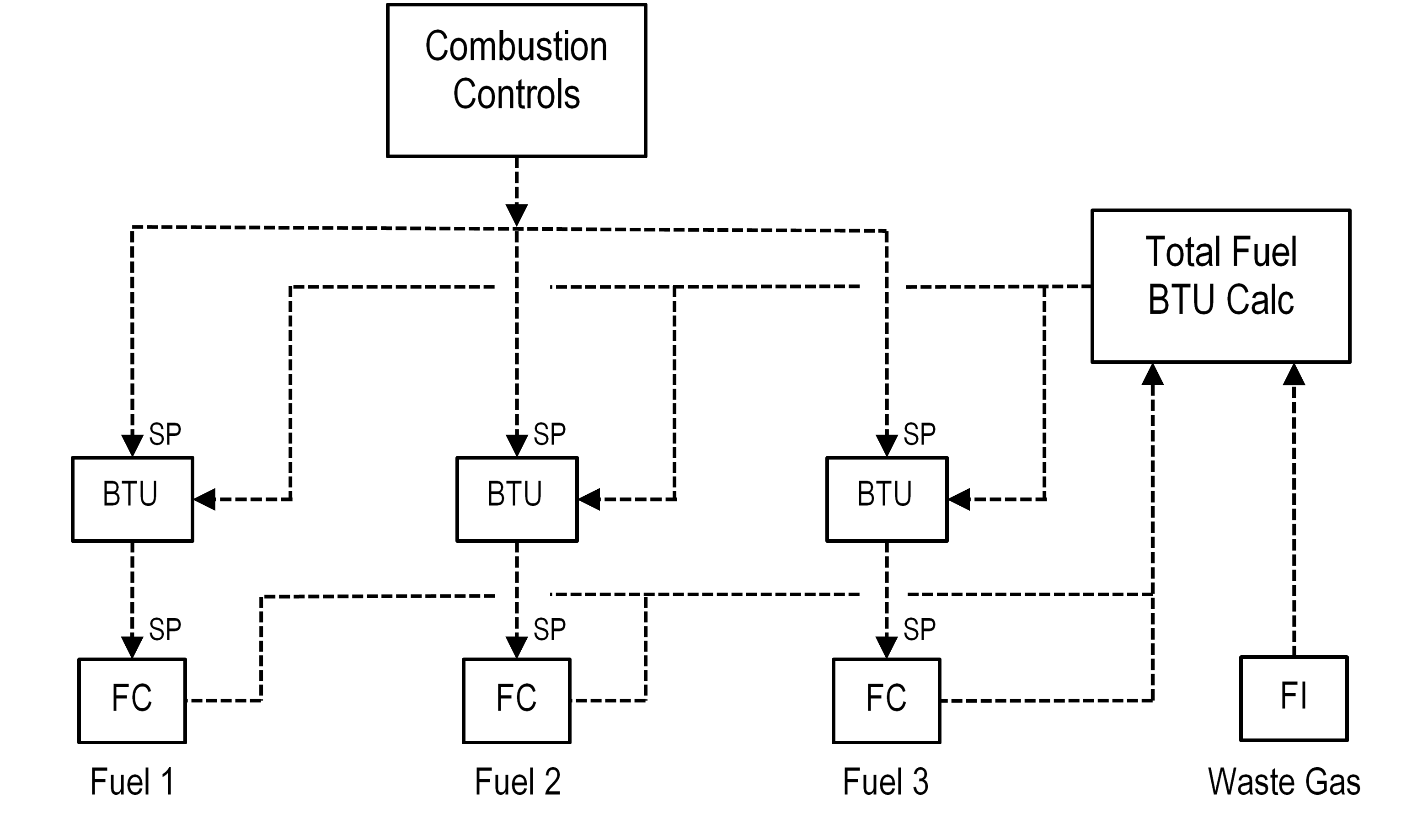 In some applications, air flow indication can be affected by significant changes in air preheat. In these cases, air temperature can be used to compensate the air flow based on its effect on air density. The square root compensation equation used for ideal gases can be employed for this application.

When the damper position is inside the gap, the gap controller will not change the governor speed. 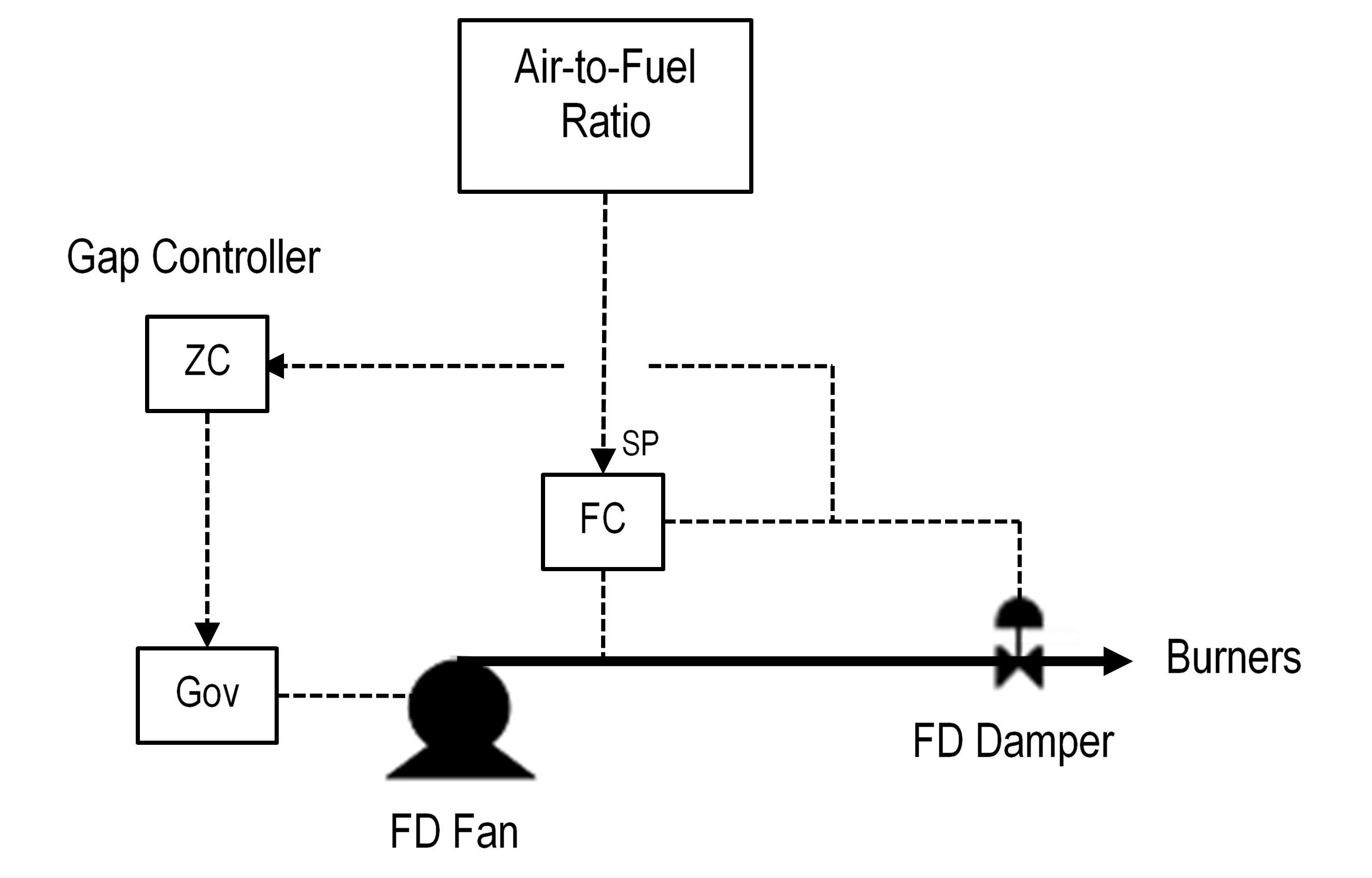 Burner pressure overrides can be added to restrict the burner pressure to a high and/or low limit. This feature is designed to prevent the combustion controls from violating the BMS burner pressure trip settings. Figure 9 illustrates the control scheme. 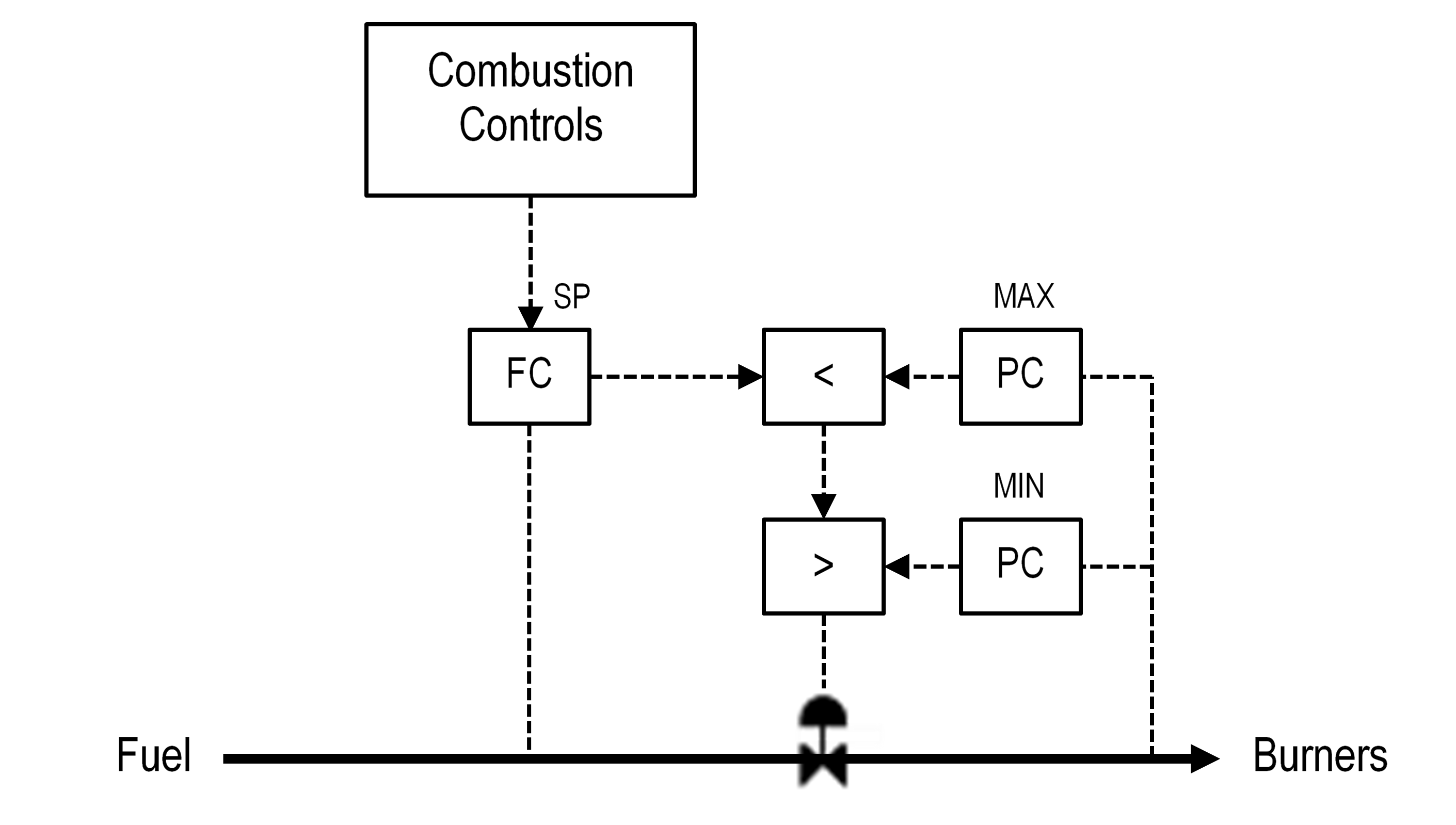 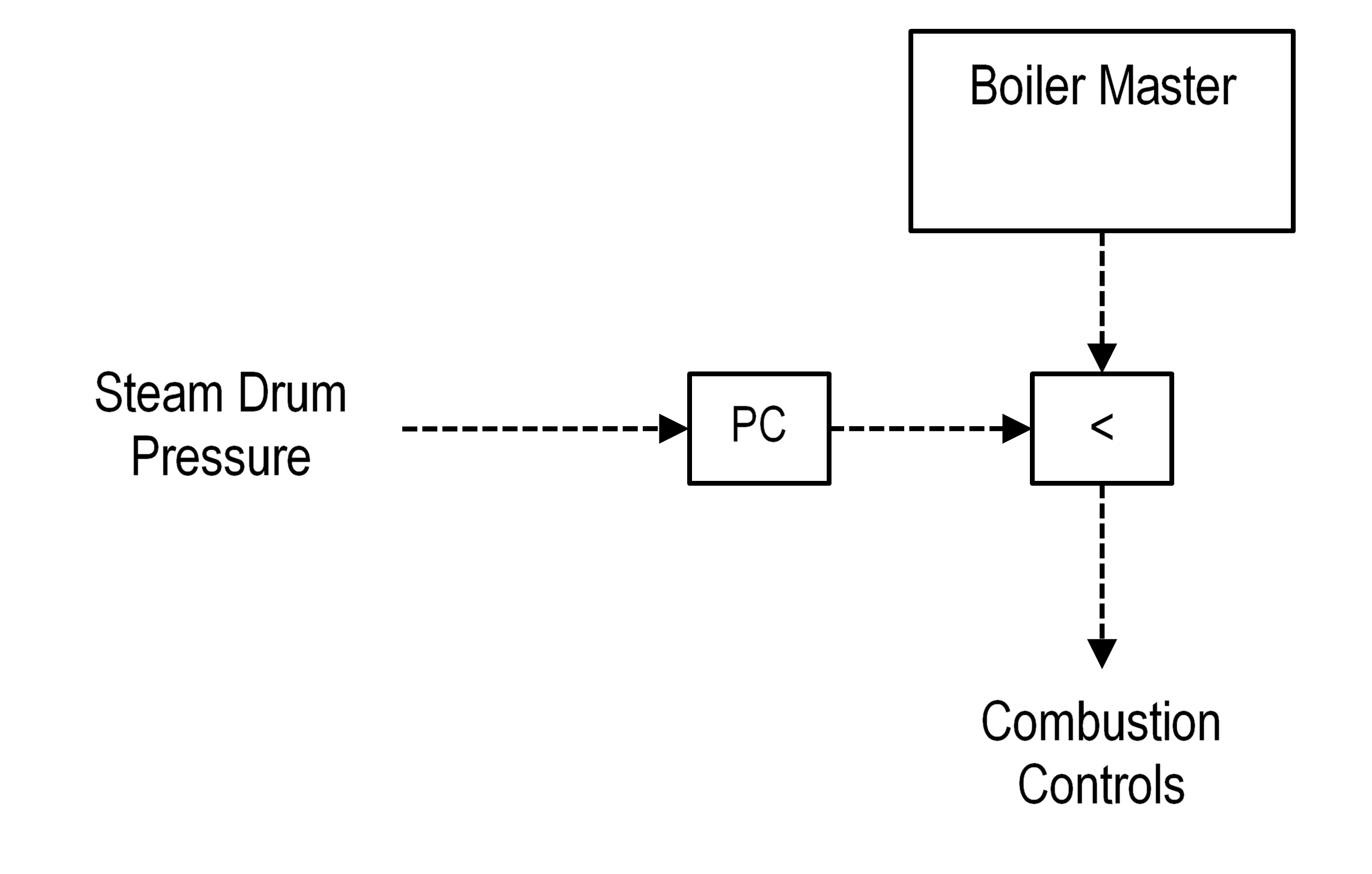