To maximize heat transfer, the hydrocarbon charge is usually split into separate passes before entering the heater. The pass flows must be carefully controlled to prevent the hydrocarbon charge from coking the tubes. Normally, a flow controller is installed for each pass to provide the desired control. These pass flow controllers together also set the total charge to the heater.

How should the pass flows be split to minimize coking? The simplest approach is to set the flows equal. This solution is valid provided that the heat transfer for each pass is uniform, thus evenly heating the charge. However, the heat transfer is usually not uniform for various reasons, the most obvious being variations in the flame pattern. The charge would be overheated in the hotter passes and underheated in the colder passes.

The best way to ensure even heating of the charge is to adjust the flow split such that the pass outlet temperatures are balanced. Therefore, the passes having the higher heat transfer receive more charge, thus preventing over¬heating and possible coking of the heater tubes.

The application includes a controller that adjusts the pass flow controller (FC) setpoints based upon the heater inlet temperature (TI) and the pass outlet temperatures (TI). The controller also controls the total flow through the passes using the sum of the flows.

The Heater Pass Balance application adjusts up to eight heater pass flows to satisfy both of the following control objectives:

These objectives are discussed in detail in the following sections. 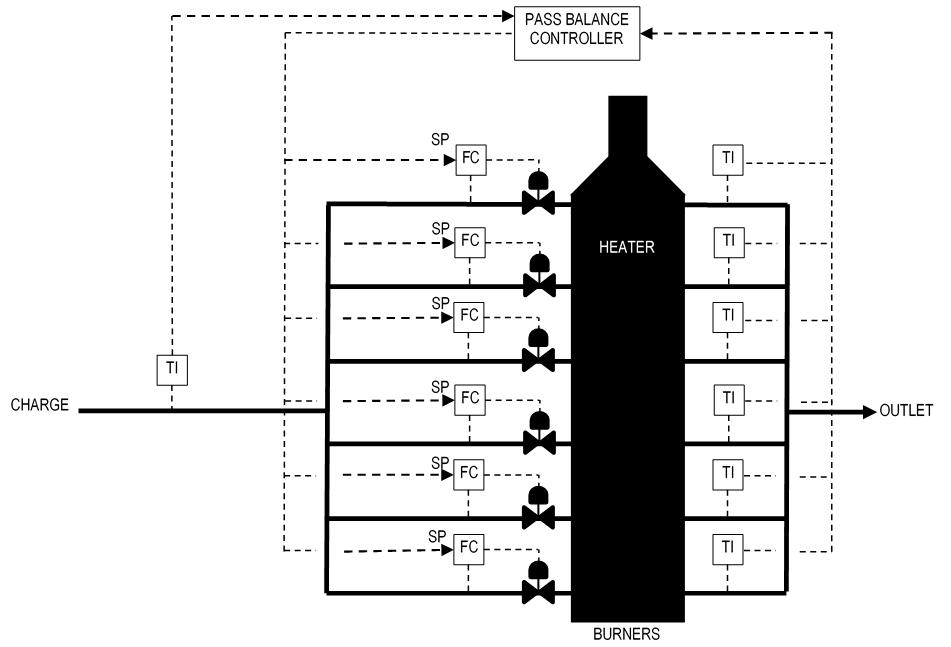 For example, if the total charge is below setpoint by 300 BPD for a six-pass heater, then the application calculates that each pass flow must be increased by 50 BPD. If the ramp rate for flow increases is less than this amount, then the increases will be limited to the ramp rate.

The pass balance control algorithm uses a model of the heat transfer in the pass to calculate the flow change. The model is the sensible heat equation, which can also be applied to vaporization of a wide-boiling-range hydrocarbon such as crude oil:

The control algorithm assumes that the heat absorbed by the pass is independent of the flow rate and the outlet temperature over a limited range. Therefore, the flow change required to balance the pass outlet temperature with the other passes can be calculated as follows:

Fpass(i) = Flow through pass i;

The summations are performed for the number of heater passes.

The Heater Pass Balance application ensures that all pass outlets are at the lowest possible temperature for the current operation. Therefore, coking in the tubes is minimized and heat transfer efficiency is greater. In addition, the total flow ramping ability ensures a smooth transition during major charge rate changes.

When a pass flow reaches its setpoint limit, the overall control action continues with the non-limited passes. However, at least one of the pass outlet temperatures will deviate from the others in this case.

A saturated pass flow control valve can severely limit the effectiveness of this application. The term “saturated” means that the valve is wide open, or at its high output limit. If the outlet temperature of the saturated pass increases above the average temperature, it cannot be brought back to the average because additional flow cannot be sent through the pass. Therefore, control is lost over this pass and its outlet temperature could continue to rise.

This feature is included to alert the operator to a severe imbalance in the heater firing. The application is reacting to the imbalance by forcing more and more flow through the passes that are receiving the most heat transfer. When the maximum pass flow deviation limit is reached, the operator should investigate the situation.

The control engineer can designate individual passes to be out-of-service in the event that they have instrumentation problems. When the application is turned on, their corresponding flow controllers will remain in MAN and they will not be included in the control action. At least two passes must be designated to be in-service.

The entire Heater Pass Balance application will automatically turn itself off when it detects a system error, user error, or a configuration error. These conditions are extremely unusual and must be corrected by the control engineer.