Advanced Level Control (ALC) is an Advanced Regulatory Control algorithm that provides improved level control action compared to a standard PID controller. ALC minimizes changes in the manipulated flow rate while maintaining the level within the desired operating zone. In addition, feedforward action can be applied to the manipulated flow where appropriate.

As the examples show, the standard level controller will move the flow around unless the level is right at setpoint and not moving. However, having the level right at setpoint is not really very important; anywhere nearby will usually do fine. In fact, minimizing the changes to the bottoms flow is far more important because the downstream tower will benefit greatly from a steadier flow.

In summation, standard level controllers have the following problems:

In the next section, we will see how Advanced Level Control deals with these control problems.

Advanced Level Control (ALC) is an advanced regulatory control algorithm that is connected to an existing level controller. The algorithm logic is designed to improve level control action by imposing the following rules:

Let’s look at each of these rules individually using the level control example discussed previously. Figure 5 shows the ALC logic added to the example originally shown in Figure 1. ALC picks up the level signal (LT) and the feed rate (FC) and adjusts various parameters in the level controller (LC).

Level signals are often quite noisy. They can be filtered somewhat to reduce high-frequency (quick, jumpy) noise, but low-frequency (gradual, rolling) noise is difficult to remove.

ALC minimizes the noise problem by ignoring any changes in the level that do not exceed a significant change limit. Therefore, no proportional control action is taken as long as the level stays inside the significant change limits. Each time the limits are violated, proportional control action is taken and the limits are reset according to the new level. Figure 6 shows how this is done. 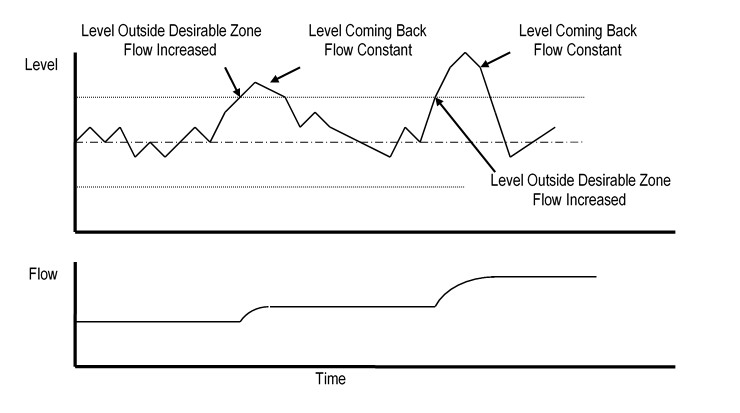 Feed rate changes take some time to show up at the bottom level. This time period is referred to as a lag. When the lag time is up and the level starts moving, the standard level controller must quickly adjust the bottoms flow to maintain the level. Figure 4 showed us what usually happens to the bottoms flow in this case.

A better way to adjust the bottoms flow would be:

ALC automatically performs steps 1 – 4. Figure 8 shows how the level and bottoms flow should respond to a feed flow decrease when ALC is on control.

The ALC algorithm operates based on control zones that are evenly spaced around the setpoint. Previously in this document, the term “desirable operating zone” was used to describe the region near the setpoint in which integral control action can be safely suppressed. Outside of that zone, integral action is taken whenever the level is moving away from the zone.

The reason for defining these zones is so that two important tuning parameters, the integral time and the desired minimum progress to setpoint, can be specified separately for each zone. Typically, the integral time is set to 9999 for the desired operating zone, between 10 and 30 minutes for the moderate control action zone, and 5 to 10 minutes for the aggressive control action zone.

Feedforward control action is included whenever the manipulated flow needs to be adjusted for changes in another flow that affects the level. This feature is especially useful in feed maximization applications involving several levels in series. When the feed maximization application adjusts the feed rate, the feedforward action simultaneously adjusts the downstream flows to lessen the response time of the process.

It should be noted that feedforward control action is somewhat inconsistent with the objective of ALC, which is minimizing manipulated flow changes. Feedforward actually causes the manipulated flow to move more often than the ALC algorithm would normally allow. Therefore, feedforward should be included only when it is desirable to reduce process response time, or when feedforward flow changes are so large compared to the vessel capacity that the level may go out of control without it.

In general, dynamic compensation is performed by a lead-lag function. The lead element provides an initial boost to the feedforward input, and the lag element provides a first-order lagged response to a step change in the input.

In an ALC application, lead is not desired because it results in excessive changes to the manipulated flow rate. Lag, being much more gradual, is better suited to ALC. The lag is adjusted to the dynamics of the actual level application via the first-order lag time constant, which is the time required for the lag output to reach 63% of the ultimate response to a step change in the input.

The change in the feedforward input must be converted to an equivalent change in the manipulated flow. The conversion factor is the adaptive gain. The calculation is as follows:

In the special case of level control applications, the adaptive gain can be calculated as the ratio of the manipulated flow to the feedforward flow as follows:

By continuously calculating this ratio, the gain is adapted to the current operating conditions. To prevent noise or other short-term flow fluctuations from adversely affecting the feedforward action, the calculated adaptive gain is averaged, as follows:

The lag constant Clag is defined as follows: